Peppers stuffed with feta are another brilliant example of how Greek cuisine combines simple ingredients to create magic. We call this mouthwatering appetizer "gemistes piperies me feta" in Greek.

You can try this recipe with any kind of peppers. However, I prefer the sweet red ones, especially the piperies Florinis. After a long voyage from South America to Europe with Christopher Columbus in the 16th century, these red peppers arrived in the region of Western Macedonia a century later. This "D" shaped pepper adapted to the region's special soil and climate, resulting in this unique variety.

If you feel more adventurous or looking after an extra spice, you can use whatever pepper you like. When I make this peppers stuffed with feta recipe, I like combining the peppers variety. I also like mixing feta cheese with kefalotyri or kefalograviera. This gives a much richer taste to the filling.

Kefalotyri (or kefalotiri) is a Greek hard, salty white cheese made from sheep's milk or goat's milk (or both). Kefalograviera is similar to kefalotyri but slightly softer and less salty. You can find both kinds of cheese at any Greek food store.

This peppers stuffed with feta recipe takes 10 minutes to prepare and 30 minutes to bake. Ideal if you are a vegetarian, it serves 4 to 6 people. 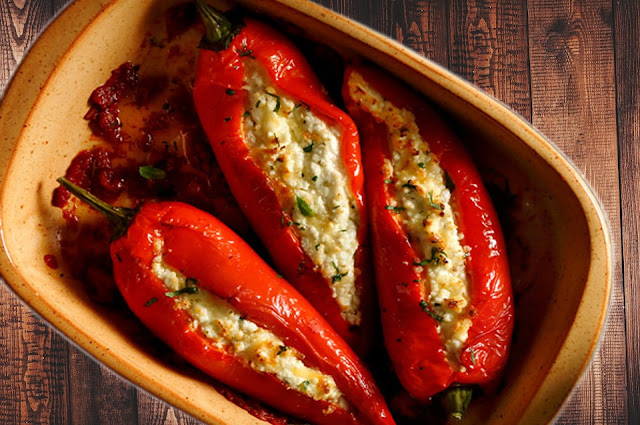 Peppers Stuffed With Feta - How to Make

You can serve peppers stuffed with feta either hot or cold. If you are a feta and peppers lover, you should try this tirokafteri recipe which combines both ingredients. Enjoy!
Appetizers Feta Recipes Peppers Stuffed With Feta Vegetarian Recipes